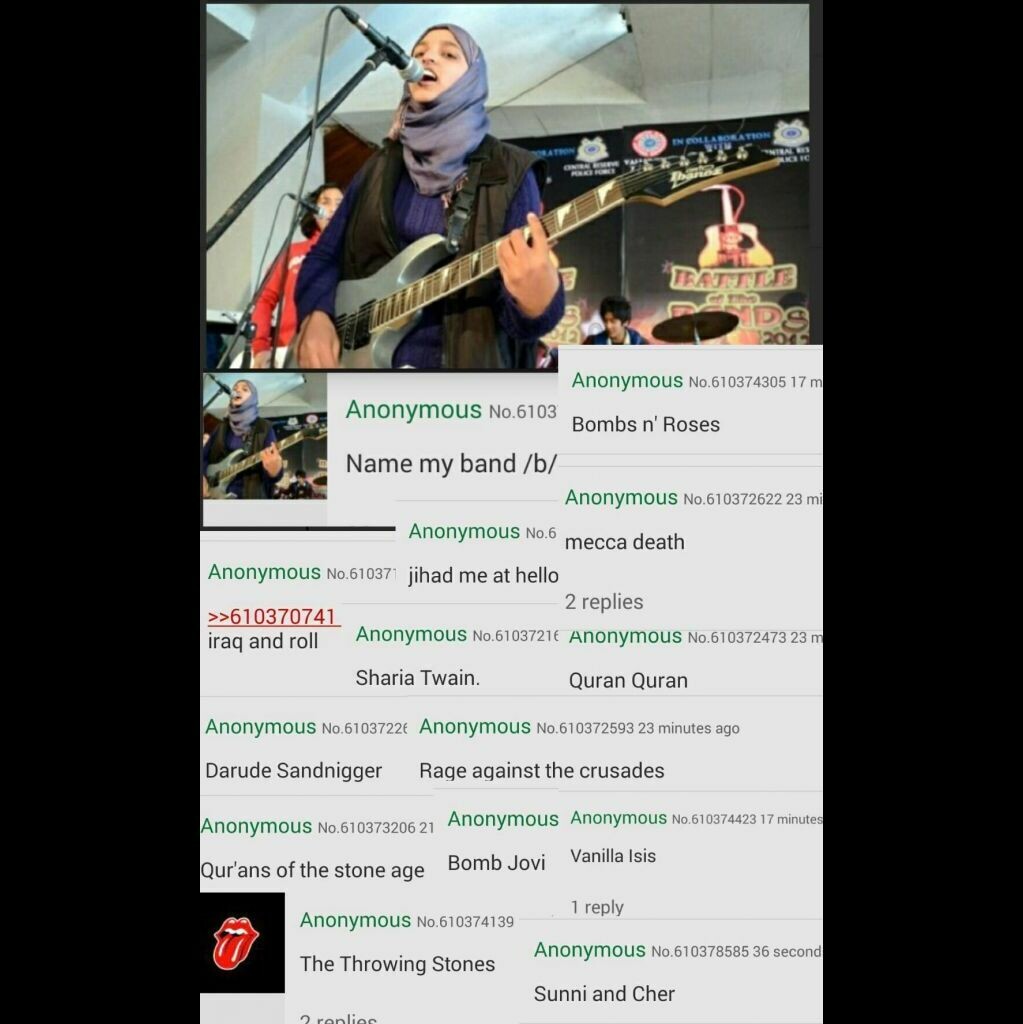 45. Desert Oasis and their hit

“Always Look Back in Anger”

44. Triumph of the 7th Century and their hit

43. The Bomb Boys and their smash hit album “Bomb Sounds”

42. Supertalib and their hits “The Illogical Song” and “Goodbye Infidel” from the album “Jihad in America”

40. Extremist and their hit “More Than Bombs”

39. Def Jakkal and their hits “Rock of the 7th Century” and “No Photograph!”

38. The Bombers and their hits

“Yesterday (It Was the 7th Century)” and

“Keep on Hating You” and

“Take It On the Run Infidel or Die!”

34. Led Zabdullah and their hit

33. Olivia Mecca John and her hit “Let’s Not Get Physical”

32. Möhammad Crüe and their hits

“Shout at the Devil Jew” and

31. Manic Street Imams and their hit

30. David Bombie and his hit “Blown to Ziggy Stardust”

29. The Traveling Wilburys on Hajj and their hit

“Handle That Bomb With Care”

28. CREEDence No Water Regression and their hit “Unfortunate Slave of Allah”

27. Judas Imam and their hit “Breaking the Sharia Law”–very transgressive!

26. Mohammadan Airplane Into a Building and their hit “White Racist Rabbit”

25. Journey to Mecca and their hit

“Don’t Stop Believin’ or Else!”

“You Bombed Me All Night Long”

“Live and Don’t Just Let the Infidels Die, Kill Them!”

22. Osama Osbourne and his hits

“Diary of a Madman aka The Quran” and

“Crazy Train Blowing Up with All Passengers Aboard”

21. Hajji Lewis and No News Allowed and their hit

“Do You Believe in Allah and His Prophet?  You’d Better!”

20. The Falcons and their hit

“Peaceful Easy Feeling But Only If You’re a Member of the Ummah and We Agree With Your Particular Interpretation Otherwise We’ll Kill You!”

19. Faisal-wahid Mak and their hits

“Go Your Own Way and We’ll Kill You!”

18. Halal Loaf and his hits

“Two Out of Three Ain’t Good Enough Infidel!” and

“Paradise by the Light of Allah with 72 Virgins”

17. Jamal Hendrix and his hit

“Hey Achmed Where You Goin’ With That Scimitar in Your Hand?”

16. The Bee Gees (Bomber Guys) and their hits

“Infidels Not Stayin’ Alive” and

“More Than a Woman Because You’re a Man”

14. Bomb Boston and their hit

“More Than a Feeling . . . It’s an Explosion at the Marathon”

13. Allah Anti-Persons Project and their hits

“Eye of Allah in the Sky” and

“Don’t Answer Me If You’re a Woman”

12. The Locked Doors and their hits

“Light My Bomb Fuse” and

“LA Woman Must Be Subjugated”

11. Pink Fahd and their hits

“The Happiest Days of Our Lives Killing Infidels,” “Another Infidel Put to the Sword,” and

10. Prog-rock band NO! and their hits

“I’ve Seen All Good People and Killed the Rest” and

9. Allah-rica and their hit “A Camel With Only One Name and His Name is Allah and Mohammad is His Prophet!”

8. The Guess Who Is Going to Kill You and their hits “American Woman in a Burqa” and

“These Eyes Are All We’re Allowed to See of Her”

“A Night at the Kaaba” and “Killer Quran”

from the album “A Day at the Marathon Cut Short”

6. Quran Quran and their hit

5. Van Hamid and their hits

“Jump to Your Deaths Infidels,” and

4. Salman & Gamalfaisal and their hits

“Mecca Bound,” “The Bomber,” “The Sound of Women’s Silence,”

“Mrs. Robinson Better Put a Burqa On,” and

“Brooklyn Bridge Over Unbelieving Waters Must Be Blown Up”

3. Ali John and his hits

2. The Throwing Stones and their hits

“Women Under My Thumb” and

“The Sound of the Call to Prayer” and its hits

“Sixteen Going on Seven Years of Marriage to Her Uncle,” “My Favorite Things That Kill Infidels,”

“The Lonely Goat Fucker,” and