But even geniuses have blind spots. And the Gamma thing is one of Mr. Day’s.

Here is again, today, railing against the Gammas and shaming them into

“Getting it UP, to GO and Marry a Feminist Slut”.

Manipulation through shame is a female tactic.

I have seen it close and personal from mother, aunts, female teachers, nuns, girlfriends, hyppiesque common law wife, that quickly turned into a feminazi, adopted daughter, females in general.

Took me years, decades actually, to just “see” it. Many hundreds of thousands of men have “been there and done that”.

Perhaps, Mr. Day in in thrall of his “anima”, one wonders.

First, he has his wife, the Bunny, telling the Gammas that they are not nice guys. She tells us REAL “nice guys” EVENTUALLY get a girl, settle down, get married and have children

Has the woman seen the divorce rate? The married rest are in fear of their female calling the cops and throwing the corrupt anti-male family court on them. Are things different in Italy? Aren’t the Gammas staying with their Mama well in their 30s?

BTW, what grown woman call herself a Bunny? Way too reminiscent of the Gloria Steinhem Playboy thing. I have been close and personal to some “Jungle Bunnies”, in times past. Fun was had by all, know what I mean? But they weren’t marriage material. I guess Vox has found a different kind of Bunny.

The MGTOW makes sense to me. He has stopped “caring what women consider” and his “emotional health has never been better”. What is wrong with that?

He CAN always change his mind later. He is a male; he CAN afford to wait. 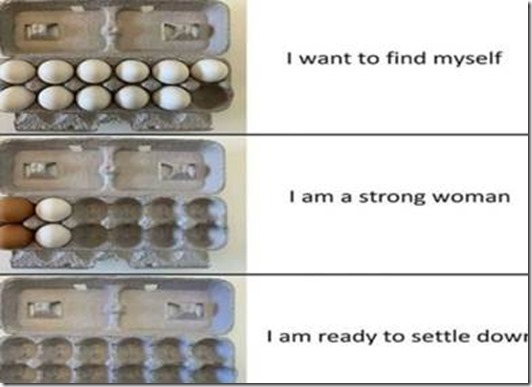 The Bunny should tell women to “land a gamma” ASAP, when they are their sexual peak.

What is wrong with the Bunny? Everyone knows this.

Except the females involved of course.

The Bunny should be doing her best to replace the missing “Grandmother Effect”: i.e., talking some sense to young girls who have their “ass on fire”.

Mr. Day should be telling all the Gammas and Incels to develop their own Inner Dark Triad.

He used to, in days past, when he was a PUA instructor.

When the Girls come for you?

Mr. Day then Doubles Down and snarks at the Gammas who have rendered themselves entirely irrelevant to human society until they die alone and forgotten. But at least, they, the Gammas, haven’t had their feelings hurt again.

Vox and the Bunny NEVER tell such thing to the future Cat Ladies.

Here is one, out of many millions:

Take a wild guess. How many eggs does she have left?

It would be funny, if it was not so tragic.

Is there a Gamma or a MGTOW for that woman?

Nah! It’s too late for her. They are legions, millions, like her.

I, personally, know some. Boner inducing sexy as teenagers. Jesus! Now in their 40s, fatter or obese, with a few failed relationships in their trail (it was NEVER their fault) and sitting on their asses waiting for “moneyed” Prince Charming to “make the first move” and take them “away from it all”.

Bears repeating: It would be funny, if it was not so tragic.

They have rendered themselves entirely irrelevant to human society until they die alone (but with cats) and forgotten. But at least, they haven’t had their feelings hurt. Right, Vox?

Where were Vox and the Bunny when the Tricias of this world needed them? Blasting the Gammas, of course.

Here is Mr. Vox Day at the Battle of Stalingrad:

Next, he is instructing the next wave of Incels sent against the Feminazi forces.

When a MGTOW goes down.

The next INCEL picks up his erection and goes forward against the Femis.

There will be victory or DEATH.

Those who retreat will be shot.

There will no mercy for cowards.

Well, I will have you know, the Incels and MGTOW, directed by the Vox Days of the time DID, finally, win the WAR against the Femis.

So, an Incel has got to ask himself.

Or in today’s Stalingrad.

Do I want to play Divorce Russian Roulette?

There IS one empty chamber in the six bullets chamber.

I COULD one of the lucky ones, just like Vox!

Vox and the Bunny:

“Pick up the Revolver, you friggin Coward!”

2 thoughts on “The VOX DAYs Always Double Down”